The purpose of this post is to set out legal arguments in order to demonstrate why and how the General Data Protection Regulation (herein after GDPR) rules will apply to the UK, in one way or another. In her speech on 17th January, Theresa May said that the European Communities Act Repeal Bill « will convert the “acquis”, the body of existing EU law, into British law ». In other words, the application of the GDPR rules after Brexit is closely linked with the question whether or not the GDPR will apply before the Brexit. Thus, this first post will point out how the GDPR will apply before Brexit and a second one will examine how the GDPR rules will apply after Brexit.*

The application of the GDPR before the Brexit

In earlier posts Peter Oliver presented the legal context of the Brexit such as the Withdrawal procedure , and the future UK’s Future Relationship with the EU, The judgment of the High Court of England and Wales and the ruling of the Supreme Court which make it clear that an Act of the Parliament is required before Brexit is formally triggered.  The present post will focus on the impact of the highly uncertain Brexit’s context on data protection. This has been taken into account in the White Paper on Brexit which refers to the importance of « the stability of the data transfer for many sectors from financial services, to tech, to energy companies. » (point.8.38).

Nature abhores vacuum, so do the stakeholders in data protection. The GDPR has the virtue of existing, at least. The GDPR has been adopted after four years of negotiations on the 26th of April 2016. It is a monster text of 99 articles, part of a package designed as a comprehensive reform of the EU legal framework that must be linked with “the second wave of global privacy law ». This reform is based on three pillars: 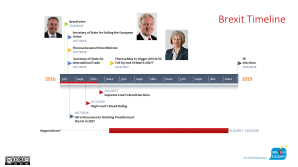 The GDPR provides a legal framework on which the actors can rely in the highly uncertain Brexit’s context. 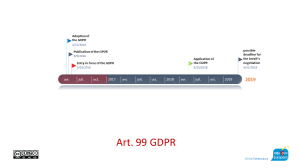 Under such circumstances, the GDPR is likely to be applicable to the UK before it has formally left the EU.

The nature of postponed application of the GDPR under article 99

Article 99 GDPR dealt with the Entry into force and application of the GDPR. It provides:

1.   This Regulation shall enter into force on the twentieth day following that of its publication in the Official Journal of the European Union.

What does it mean exactly?

The UK’s options before Brexit

The UK has two options regarding the GDPR before Brexit. Both of them will inevitably will have an impact on the Data protection after Brexit.

One could also argue that private sector is also faced with two choices:

Our next post will explain how the rules of the GDPR will also apply after the Brexit. Just to give a flavour on it, it is interesting to underline that « The UK first introduced data protection legislation in 1984 [was a] response to pressure from the business community, which voiced concerns that the UK would lose cross border trade in personal data if it remarined a « data heaven »:  as Dr. Karen Mc Cullagh said. (p.6)

* Theses posts are adapted from a presentation made at the Computers, Privacy and Data Protection Conference 2017 in a roundtable called « Data protection after Brexit ». An academic paper will be available  later in the University Paris-Dauphine institutionnal repository. I will very much welcome and value comments, suggested readings you consider revelant at : olivia.tambou@dauphine.fr

To be continued next week